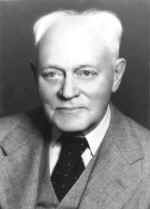 (A.A. Grapevine Editor’s Note: In the opinion of the staff, the importance of the following interview lies in the fact that it represents the deductions of a man who is in the unique position of being able to appraise A.A, as both an “insider” and an “outsider,” as both an old friend of A.A. and an M.D. who began working with alcoholics long before A.A. was conceived.)

Anyone who tried to impress a drinking alcoholic with the approach, “You can’t have your cake and eat it, too,” would probably draw a scornful, “So what! Who wants any cake? Tony, make it a double this time.”

The same idea expressed as, “You can’t have your bottle and drink it, too,” might get his attention because to a drinking alcoholic a fresh unopened bottle, brimming brightly with abundance, is a symbol of good things to come. He knows well enough, of course, that he can’t drink it and still have it, but he blocks his mind to the inevitability of that horrible moment when the last bottle will be empty.

The untapped bottle remains a symbol to the non-drinking alcoholic, at least to the alcoholic who has dried up in A.A. So long as it stands unopened it represents drinks he has not taken–and the good things of life he has found by not drinking.

Yet, now and then a persevering soul tries to have both the figurative and the liquid contents of the bottle. He tries to make an impossible compromise.

In the opinion of a man who has administered personally to at least 10,000 alcoholics, the attempt to make this kind of a compromise is one of the most common causes of failure to get a safe hold on A.A. Dr. W. D. Silkworth, genial and beloved little patriarch at Town’s Hospital, New York, for 12 years and now also in charge of the new A.A. ward at Knickerbocker, also New York, defines it as the “alcoholic double-cross.”

“The majority who slip after periods of sobriety,” says Dr. Silkworth, “have double-crossed themselves into thinking that somehow they can have the unopened bottle and drink it, too. Even though they have been in A.A. and going to meetings, and following parts of the program, they have accepted it with reservations somewhere. They actually have been only one step ahead of a drink. Then they begin playing around with the notion they can drink a little and still have the good things of A.A. The outcome is as inevitable as the bottle becoming empty once it has been opened by the alcoholic.”

When Dr. Silkworth discusses A.A. “slips” his usually cheerful face becomes serious, even a little grim. Through his long years of practice in the field, he has become increasingly sympathetic, not case-hardened, to the alcoholic. He understands what they experience. Having been one of the first in his profession to support A.A. and having guided scores of alcoholics into A.A. during the last 10 years, he also appreciates the fact that a “slip” for an A.A. involves an extra degree of remorse and misery.

Dr. Silkworth is particularly emphatic on one point.

” ‘Slips’ are not the fault of A.A. I have heard patients complain when brought in for another ‘drying out,’ that A.A. failed them. The truth, of course, is that they failed A.A.

“But this mental maneuvering to transfer the blame is obviously another indication of fallacious thinking. It is another symptom of the disease.”

A quick way to get Dr. Silkworth’s appraisal of A.A. is to ask him how he thinks “slips” can be prevented.

“First,” he explains, “let’s remember the cause. The A.A. who ‘slips’ has not accepted the A.A. program in its entirety. He has a reservation, or reservations. He’s tried to make a compromise. Frequently, of course, he will say he doesn’t know why he reverted to a drink. He means that sincerely and, as a matter of fact, he may not be aware of any reason. But if his thoughts can be probed deeply enough a reason can usually be found in the form of a reservation.”

“The preventative, therefore, is acceptance of the A.A. program and A.A. principles without any reservations. This brings us to what I call the moral issue and to what I have always believed from the first to be the essence of A.A.

“Why does this moral issue and belief in a power greater than oneself appear to be the essential principle of A.A.? First, an important comparison is found in the fact that all other plans involving psychoanalysis, will power, restraint and other ingenuous ideas have failed in 95 per cent of the cases. A second is that all movements of reform minus a moral issue have passed into oblivion.

“Whatever may be the opinions one professes in the matter of philosophy–whether one is a spiritualist or a scientific materialist –one should recognize the reciprocal influence which the moral and physical exert upon each other. Alcoholism is a mental and physical issue. Physically a man has developed an illness. He cannot use alcohol in moderation, at least not for a period of enduring length. If the alcoholic starts to drink, he sooner or later develops the phenomenon of craving. Mentally this same alcoholic develops an obsessive type of thinking which, in itself a neurosis, offers an unfavorable prognosis through former plans of treatment. Physically science does not know why a man cannot drink in moderation. But through moral psychology–a new interpretation of an old idea –A.A. has been able to solve his former mental obsession. It is the vital principle of A.A., without which A.A would have failed even as other forms of treatment have failed.

“To be sure, A.A. offers a number of highly useful tools or props. Its group therapy is very effective. I have seen countless demonstrations of how well your ’24-hour-plan’ operates. The principle of working with other alcoholics has a sound psychological basis. All of these features of the program are extremely important.

“But, in my opinion, the key principle which makes A.A. work where other plans have proved inadequate is the way of life it proposes based upon the belief of the individual in a Power greater than himself and faith that this Power is all-sufficient to destroy the obsession which possessed him and was destroying him mentally and physically.

“For many years I faced this alcoholic problem being sure of one scientific fact –that de-toxication by medical treatment must precede any psychiatric approach. I have tried many of these orthodox psychiatric approaches and invented some new ones of my own. With some patients I would be coldly analytical, if they were of the so-called ‘scientific’ type who is apt to have a superior attitude toward anything emotional or spiritual. With others, I would try the ‘scare’ method, telling them that if they continued to drink they would kill themselves. With still others, I would attempt the emotional appeal, working both the patient and myself into a lather. He might be moved to the point of shaking hands dramatically and telling me, with tears streaming down his face, that he was never going to take another drink. And I knew that the probability was he would be drunk again within two weeks, or less.

“Since I have been working with A.A. the comparative percentage of successful results has increased to an amazing extent.

“The percentage of success that A.A. has scored leaves no doubt that it has something more than we as doctors can offer. It is, I am convinced, your second step. Once the A.A. alcoholic has grasped that, he will have no more ‘slips.’ “