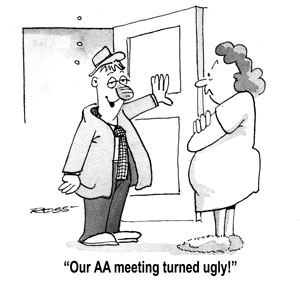 Either way to the “REAL” alcoholic or addict this kind of meeting means “OD”!

When A.A. was very successful, that is 50% – 75% recovery rates, the folks who did the talking in meetings were recovered alcoholics. The suffering and untreated alcoholics listened. After hearing what it takes to recover, the newcomer was faced with a decision; “Are you going to take the Steps and recover or are you going to get back out there and finish the job?” If they said they “were willing to go to any length,” they were given a sponsor, a Big Book and began the process of recovery by taking the Steps and experiencing the Promises that result from that course of action. This process kept the newcomer involved in working with others and continued the growth of our Fellowship.

Today we have the meeting format known as the “Open Discussion” Meeting or “OD” on your meetings list. This is time set aside for for drunk-a-logs, a discussion of our problems, ideas and opinions or “my day” or “my way.” Recovery rates are less than 10% in the rooms today!

It would appear that we have permitted newcomers to convince the old-timers that they have a better idea. They had just spent 30 or more days in a treatment facility where they had been impressed with the need to talk about their problems in Group Therapy Sessions. They had been told that it didn’t make any difference what their real problem was; A.A. had the “best program.” They were told that they should go to an A. A. meeting every day for the first 90 days out of treatment. They were told that they shouldn’t make any major decisions for the first year of their sobriety. And what they were told goes on and on, most of which are contrary to the program of Alcoholics Anonymous! Apparently, what they were told sounded pretty good to the A.A. members who were here when the Treatment Center clients started showing up at our meetings.

A group cannot take on the personal problems of its members–the primary responsibility for the solutions of all their problems of living and growing rest squarely upon the individual themselves. Should a group attempt this sort of help, its effectiveness and energies would be hopelessly dissipated. Sobriety — FREEDOM from the obsessive thoughts, compulsive feelings, and physical cravings that ruled our lives, through the teaching and practice of the Twelve Steps, is the SOLE PURPOSE of the group. If we don’t stick to this cardinal principal, we shall almost certainly collapse, and if we collapse, we can’t help anyone.

On page 86 of the Big Book of Alcoholics Anonymous it says:

But we must be careful not to drift into worry, remorse or morbid reflection, for that would diminish our usefulness to others.

Question – Should we take a stand in meetings of this type and speak out against it? Do these types of “open discussion” groups have any business or right to call this type of meeting a 12 step program? Should we actively commence to change these types of meeting formats or should we just leave our group and go start another meeting that is about working the 12 steps to recovery? We’d love to hear your comments!